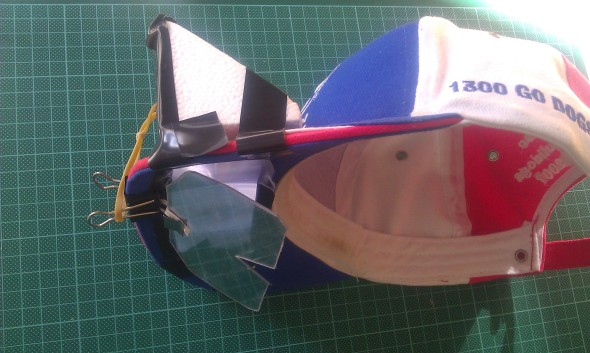 Two of the problems with the original baseball cap head-up display were the dimness of the image and the difficulty of aligning the reflective screens. They turned out to be fairly easy to fix.

First, the two reflective screens, one for each eye, were replaced with a single screen. Going from two surfaces, each with two degrees of freedom, to a single surface with one degree of freedom makes it much easier to line up the image.

The original motivation for using two screens was to have the option of varying parallax to control the image distance. Nice in theory, but too hard to use in practice. I also think two screens looks cooler, but given how lame the whole setup looks, I don’t think it matters.

The dimness problem was solved by using a more reflective material. The iPhone case protector film was replaced with 15% VLT mirror-tint film, the stuff you put on windows. 15% VLT means 15 percent of visible light is transmitted, and presumably the remaining 85 percent is reflected. Melbourne has been overcast the past few days, so I haven’t had a chance to test it in strong light, but indoors it works really well.

Now that the screens are lined up properly and I can clearly see the image, I noticed another thing: more by luck than anything else, when the phone is displaying a live video feed, it lines up exactly with the real world. In a dark-ish room where the video is the main source of light, it’s good enough to navigate by. And it means augmented reality applications such as Wikitude will display points of interest in the correct location. Nice.

One final problem with the original design was the weight of the phone on the end of the cap. I have an HTC Desire Z with a slide-out keyboard, and it’s a fairly hefty device. I speculated that a lighter phone such as an iPhone or a keyboard-less Android might be more comfortable. Well, it turns out they are. A lot more comfortable.

They also avoid another Desire Z problem – when attached to the cap, the volume control buttons of the Desire Z rest on the bulldog clip. That causes the “volume down” button to remain depressed, putting the phone into vibrate mode – and making the phone buzz continually to let me know. The other phones I tested are either too light to depress the buttons, or the buttons are located somewhere else. So now I’m tempted to buy a cheap second-hand Android as a dedicated augmented reality device.